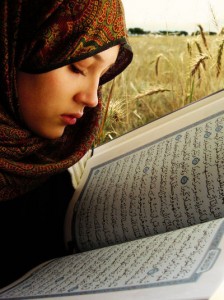 In case that somebody says or accuse that Quran is absolutely not the word of Allah all mighty then common sense, understanding, wisdom, logic and even the common laws of any court of the world orders that who has accused should be responsible to provide the cogent evidence against it.

In case that somebody challenges something which happens to be accepted by every person, he is then responsible to provide the evidence to prove them wrong in the logical manner. For eg, if I would say that Shakespeare did not wrote a book on Romeo and Juliet, then it’s must for me to produce the evidence against the accusation.

now a day’s people also say that the Holy Quran is not the word of God, the first question that they should ask them self can any person produce a book by his own self which not just guides to Muslims but also is the way of guidance to all Mankind and is been there from more than 1400 without any changes and can a person know the future and point certain things accurately as they are been discovered just couple of years ago some of the eg i will be mentioning

(In holy krona, 21,32) Allah all mighty has mentioned that “We made the sky a preserved and protected roof yet still they turn away from Our Signs”

In 20th century a research that was carried out about this attribute of sky. The atmosphere which is surrounding earth serves as crucial functions for the continuity of our life. it also prevents and destroys harmful meteors small and big as they approach to earth so they could not harm living things.

there is another verse from (holy Qur’an. 57,25) in which Allah subhan -u- tallah says
“And We sent down iron in which there lies great force and which has many uses for mankind”
the word “sent down” is very important if we see it means that iron did not develop by it own self in the earth it came from outer space now how could a normal man know 1400 years back that it came from outer space or does outer space exist

Which scientist just found in that the iron came from outer space When in certain level the amount of iron exceeds in stars and a star can no longer accommodate it
so the star explodes in manner that is called “supernova” or a “nova” and due to that explosion, meteors containing iron are then scattered all around the universe

So read the holy Quran before you saying something about it. I can refer many more verses from the holy book to proof that it’s the word of Allah subhan -u-tallah not an ordinary person and there is one who created us and if you see besides yourself what is around you eg. air, water, sky, mountains the whole universe, the creatures around us and they life cycle even how a baby becomes to life is also mentioned in Qur’an and itself is the Miracle of Allah subhan -u- tallah and there are true signs for those who believe that there is a creator and all these things are not created by coincidence and the holy Qur’an is the word of Allah subhan-u- tallah. Learn the teaching of our holy prophet Muhammad (peace be upon him) from professional Quran teaching staff

At last i would like to ask a question from my muslim brother and sister did you know about it before have you explored the holy Koran and studied it in the true meaning these scriptures are passes to us from our prophet Mohammad peace be upon him and came along heart by heart and to us so no one could change it and its protector is the lord (all mighty) it’s our duty to learn the Quran with tajweed and memorize it by heart also should know more than the Arabic scripture the translation or tafseer with the light of true hadeeth as well you can register for 3days free Koran teaching lesson for kids and elders. there are many benefits of just learning the holy scriptures You can also learn the principles of tajweed with live session.