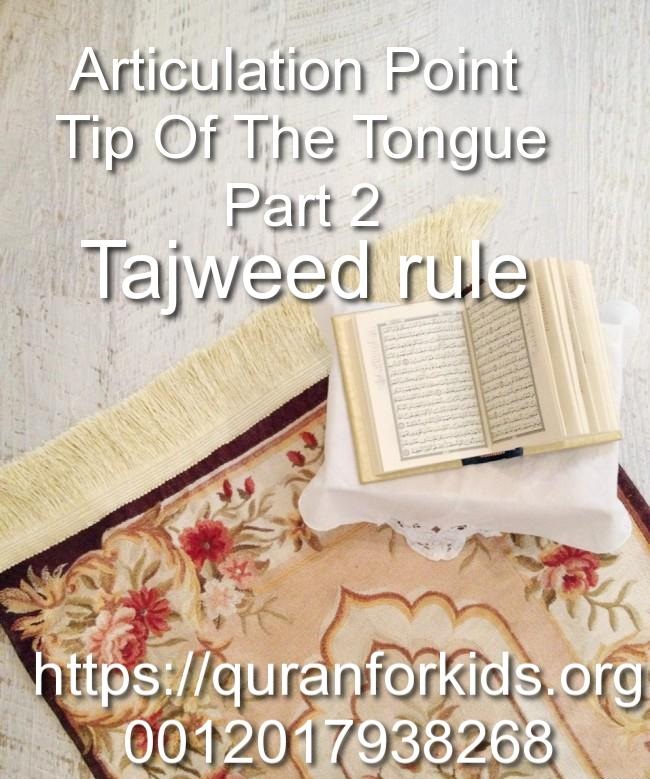 Today we will continue the Tajweed rule lesson about Articulation Point Tip of the Tongue part 2. In it we will discuss about these three letters

Incorrect pronunciation can occur if these letters are sounded out using the soft elevated region behind the gums in lieu of the gum line of the top incisors. In such cases, the letters are emitted from the back part a little too far and this results in a very heavy sound of all three alphabets.
Another mistake can also cause errors in the pronunciation of these letters. If a large portion from the top of the tip of the tongue is used instead of just the small part of the tip, it again results in a heavy sound of

is the strongest one from all the Arabic alphabets. It has “tafkheem” (heaviness). It also sticks to the roof of the mouth, which is why it possesses a strong sound. A unique mistake that is associated with the pronunciation of this heavy letter is that it does not get enough strength while being sounded.

Also, sometimes most of the tongue does not stick to the roof of the mouth and this makes an incorrect sound of the letter.
It should be noted that

is a very unique Arabic letter. Since it is not a common alphabet in other languages, it needs sufficient practice to be sounded appropriately. You can learn to pronounce this letter by listening to Top reciters.
For a detail of other letters that are pronounced using the tip of the tongue, you should read the following articles:
Articulation Point Tip Of The Tongue Part 1,
Articulation Points Tip of the Tongue Part 3,

Please put your share to spread Islam and the knowledge of Tajweed by liking and sharing the article.